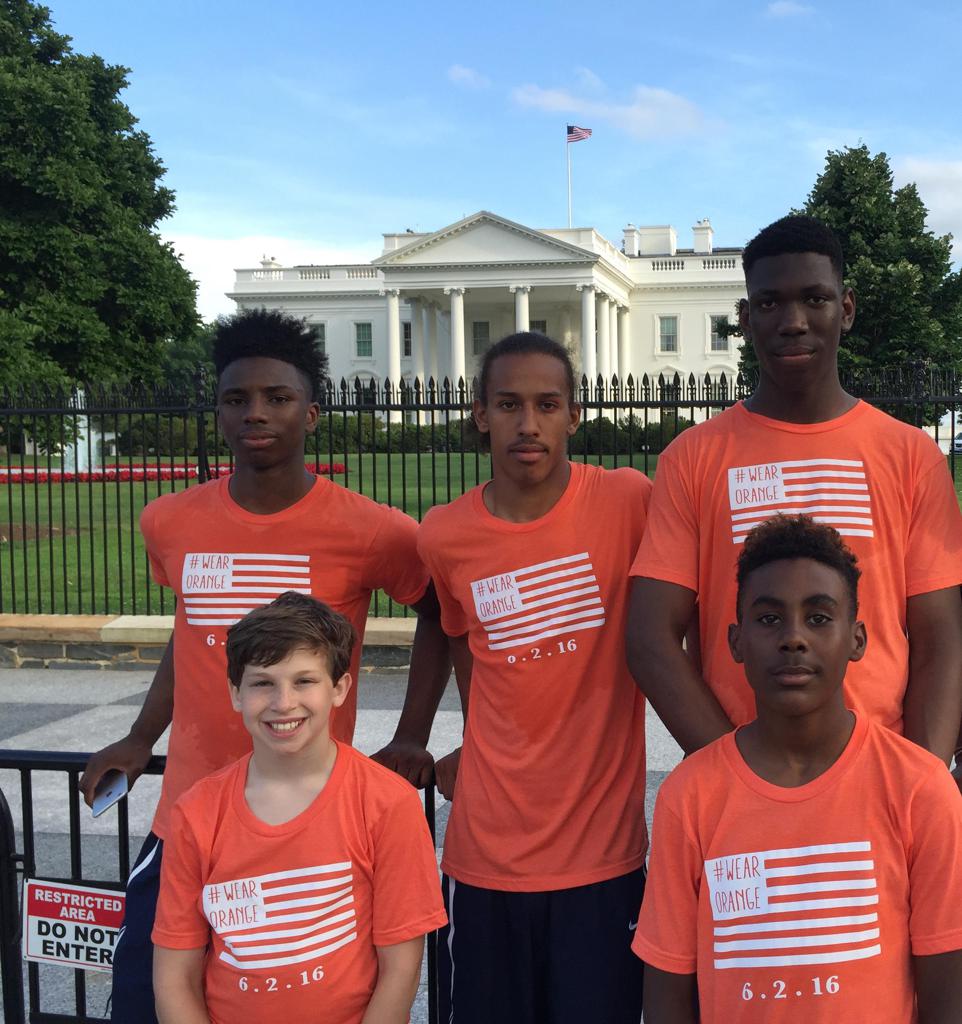 Renaissance players on their visit to the White House to advocate against gun violence.

“The Patch” program was created to address an issue that is pervasive among The Renaissance’s and many other inner-city communities. When this life- threatening epidemic hit home within the Renaissance family, in 2015, the organization and its members took action. It was time to take a stand against gun violence.

Tyrek Chambers, a student at Christ the King High School and a player on the Renaissance, was shot while walking to the corner convenience store in his neighborhood of Brownsville. Tyrek was lucky. He recovered from the bullet to his stomach. But while he was bleeding on the streets of his hometown, he realized that others would not be as lucky if gun violence among his peers was not stopped.

The Renaissance players and their coaches wanted to take a stand. They turned to experts at anti-gun violence groups such as Everytown for Gun Safety and Sandy Hook Promise, and “The Patch” was adopted. “The ‘Wear Orange’ campaign was inspired by a few Chicago teens who sent a simple - but powerful - message: We refuse to accept the gun violence crisis that’s decimating our communities and we’re going to do something about it,” said Jason Rzepka, Director of Cultural Engagement at Everytown for Gun Safety. “It is fitting that the young athletes of The RENS will be the first sports team in the country to wear orange patches on their jerseys, sending a message of hope and empowerment.  We salute the RENS’ commitment to helping achieve an America free from gun violence and believe their action will reverberate well beyond the AAU gyms where they compete."

Worn on the uniforms of every player and coach in the Renaissance organization, this orange patch was designed to create awareness and educate the Renaissance family about the horrors of gun violence.

Exceutive Director and Renaissance EYBL 17U Head Coach Andy Borman noted their unfortunate track record.  Two RENS children were shot, one of which, a 15-year-old was left wearing a colostomy bag.  Another was arrested for shooting someone else, and a former player was charged with shooting his own teenage girlfriend to death. “The RENS are far from the exception. We are the rule, and it has to stop. Basketball is a beautiful game, these kids are precious, and they are taking a stand,” Borman insisted.

Mr. Borman explained, “All 200 RENS student-athletes (grades 3 through 11) will wear the emblem and carry the message throughout the yearlong AAU basketball season.”  Borman, a member of Duke University's 2001 NCAA championship team, and the nephew of Blue Devil coach Mike Krzyzewski, said, “It’s impossible to work in this arena without seeing and feeling the full effects of one gun related tragedy after another.  These horrors senselessly affect families, children, mothers, and fathers. By asking our student athletes to wear the orange color which expresses 'safety' and 'sanity' in the face of violence, we are hoping to teach children that gun violence is unacceptable and wrong.”

Nicole Hockley, Managing Director and Co-Founder of Sandy Hook Promise added, "While we at Sandy Hook Promise believe our country needs to make progress on policies for appropriate firearm access, we also believe that we must change our attitudes and behaviors on passively accepting daily threats and violence, believing ourselves immune to having this sort of tragedy in our own community and believing we are helpless to prevent it in any case. None of us is immune and none of is helpless. We applaud the RENS for taking on this difficult issue plaguing their community and look forward to working with them to introduce our prevention programs and start to create change”.

Jack Irushalmi, a RENS board member since the organization was founded, said, “'Orange' means make another choice, don't listen to gang members, close your ears to anyone and everyone who thinks it's cool to have a gun. It means do whatever you can to fight for safety, decency, change, and a deeper sense of courage. The children and parents at the RENS should feel so proud of their leadership role.”

Jennifer Gardner Trulson, another RENS board member and 9/11 widow, said, “As a mother I’m shattered almost daily when I learn about another child senselessly dying from a gun-related incident.  It is morally imperative that we educate our children and community about gun violence and work together -- along with our lawmakers -- to end such needless, preventable tragedies.”

Articles about "The Patch" and the significance of its symbolic gesture, have appeared in The New York Times, New York Post, Daily News, People Magazine, ESPN Magazine and more.

Social media conversations praising the efforts of The Renaissance have been started by Chris Paul, Shane Battier, Rev. Al Sharpton and others.

Executive Director Andy Borman has appeared on ESPN Sportscenter, ESPN Outside the Lines, and ESPN The Undefeated, on which he participated in a panel discussion that took place in Chicago addressing the detrimental impact of gun violence on our youth.

The Patch initiative has really gained steam over the past few years, and we look to continue to spread awareness and educate the masses about how much gun violence should not go unnoticed and how it should be addressed and avoided!

*** If your program or team would like to wear "The Patch", please email ABorman@nyrhoops.org