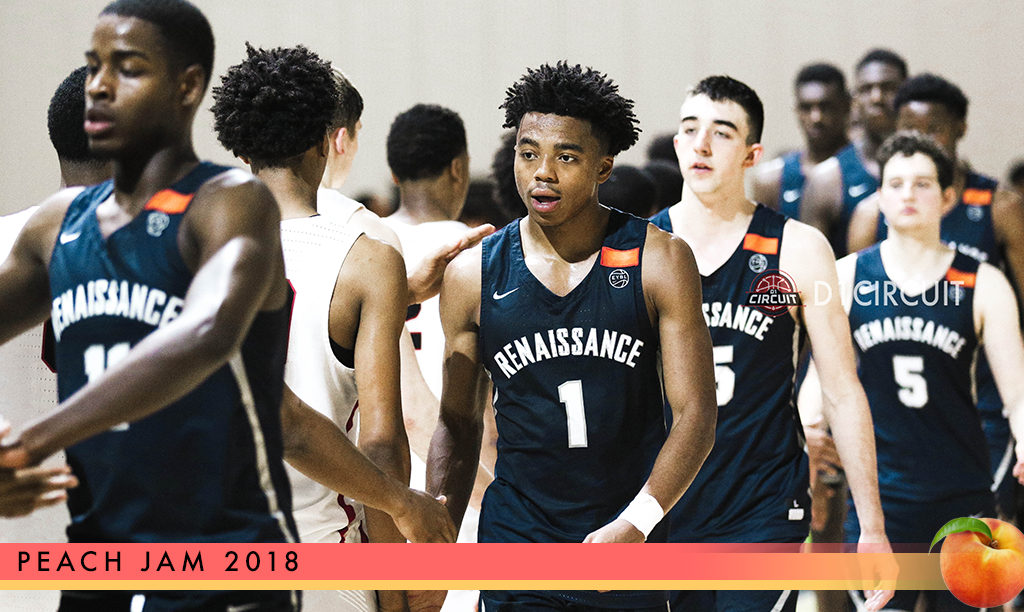 After failing to qualify for Peach Jam last year, the NY Renaissance are back in and ready to their championship push. It was a close call, but after beating the NJ Playaz in the final game of the regular season on a buzzer-beater, 81-80, the Renaissance became Peach Jam qualified. They have a well put together team with players who fit various roles. They finished their season with an 8-8 record, which was a bit of a disappointment for them as they started the season off with a 3-1 record. The Renaissance could definitely surprise people with how much talent they have. With the likes of Jalen Lecque and Kofi Cockburn, they are more than capable of making a deep Peach Jam run.

There are two stars on the NY Renaissance and they are Jalen Lecque and Kofi Cockburn. The class of 2019 prospects make a strong argument for being the top guard and big man duo throughout the Nike EYBL. Lecque stepped up in some of their biggest games and the first one that comes to mind is the final game of the regular season against the NJ Playaz. With the Renaissance facing elimination, Lecque stepped up in a huge way by scoring 23 points while shooting 9 for 10 from the field. He has the talent to impose his will on any team throughout the EYBL. Big man Kofi Cockburn has brought his team consistency. After getting off to a slow start Cockburn had some monster performances as the season progressed. His size and physicality is hard to contain for opponents and someone the Renaissance look to for production.

The Renaissance backcourt has its share of athleticism, skill, basketball I.Q. and more. The leader of the group is class of 2019 guard Jalen Lecque. We all knew what type of prospect Lecque was heading into this season, but we got to see him develop into more of a point guard this season. He was complemented by talented guards like Tyler Bertram, who is one of the top shooters throughout the country. Bertram will have plenty of high major schools tracking him this July. Class of 2020 guard Nate Tabor’s size and skill set makes him one of the top guards in his class. He is a dynamic prospect and has had great flashes this season. Class of 2020 wing Ethan Morton has a great deal of talent and is more than capable of making of having a big July. Lastly, Daniel Klosk is a good role player for the Renaissance and showed he can compete at a high level when he dropped 17 points on the Las Vegas Prospects at session two of the EYBL.

The New York program has one of the best frontcourt players in the nation with Kofi Cockburn. The class of 2019 big man has had another big season on the circuit as he is averaging 15.8 points and 10.8 rebounds per game this season. The first one that comes to mind with Cockburn’s play is dominant. His physical play coupled with his improved skill set makes him one of the toughest matchups in the EYBL. Jonathan Kuminga has shown that he is one of the top prospects in the class of 2021. In the first rankings for his class ESPN has Kuminga ranked 9th in the nation and deservedly so. As young as he is Kuminga competes well with talented upperclassmen. His athleticism and motor adds a great deal to this Renaissance team. Class of 2020 power forward Kareem Reid has shown good flashes and class of 2019 Ty Rivers can impact the game on both ends with his physical play.

The NY Renaissance are another example of team that’s biggest competition is themselves. They have shown tremendous potential with one big example being that they took the best team in the EYBL to overtime in Team Takeover. The Renaissance have the talent to make a run, but it all starts with them. When looking back this team has a lot of similarities to the NY Renaissance team from two years ago. They both got off to great starts, but then hit their rough points. They had their stars as well with players like Hamidou Diallo, Jordan Tucker and Jordan Nwora. They barely qualified for Peach Jam, but put it all together and made a run to the elite 8 where they almost beat Team Penny. Could this team do the same? Possibly, but they will need to play with consistency.  Two games that stand out this season for them was once again their loss to Team Takeover and their win against the very talented Bluff City Legends. Against the Bluff City Legends they had a well balanced scoring attack with four guys scoring over 10 points. Kofi Cockburn stepped up both offensively and defensively as he did a great job against James Wiseman. They played good team basketball and this is what will determine whether they can make a run or not.