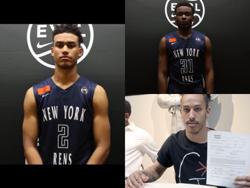 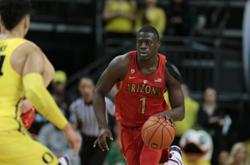 Arizona and freshman guard Rawle Alkins will look to clinch the Pac-12 regular season title on Saturday vs Arizona St and an Oregon loss. The Wildcats are currently tied at 15-2 in the conference with the Ducks, but Oregon owns the tie-breaker because of a win over Arizona in early February. Rawle has had a solid first year in Tucson, averaging just over 11 points per game, 5 rebounds, and 2 assists per game. After the conclusion of the regular season, the Wildcats will travel to Las Vegas for the Pac-12 tournament and then await to see where they will play in the NCAA tournament. The Wildcats will look to reach a Final Four in their home state of Arizona (Phoenix). 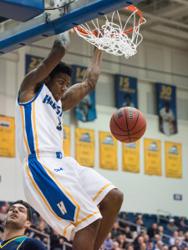 Hofstra sophomore guard, Justin Wright-Foreman, has scored twenty points in nine consecutive games dating back to January 21st. Throughout Colonial Athletic Association play, he has averaged just over twenty four points per game. He has scored thirty points three times in conference play and has had at least twenty five points in eight games. His 17.3 points per game average compared to last year where he averaged just 1.6, make him the most improved scorer in the country.

Arizona freshman guard, Rawle Alkins' steady play has helped the Wildcats reach the top five for the first time this season after securing their 14th straight win and 9th straight win to open up conference play. The 20-2 Wildcats' most impressive win to start conference play came at UCLA as they defeated the Bruins by double digits. This weekend, Arizona will travel to Eugene to face their Pac-12 rival and 13th ranked Oregon.

Wright-Foreman Scores 30 in Back to Back Games 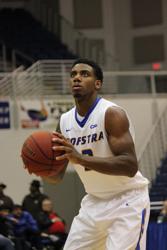 Hofstra sophomore guard, Justin Wright-Foreman scored thirty points in a 78-73 win over Northeastern. Wright-Foreman went 11-15 from the field and knocked down four out of seven shots from behind the arc while grabbing six rebounds and three steals. His 30 point explosion matched his career high and gave the Pride a much needed conference win.

Just five nights later, Wright-Foreman scored another 30 on 13-25 shooting from the field while adding six rebounds in a 1 point overtime loss to Drexel. He leads the Pride in scoring at just over 15 points per game. 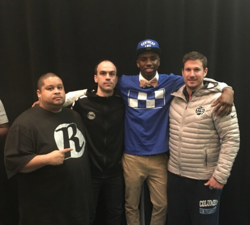 RENS 17U guard, Hamidou Diallo, committed to the University of Kentucky. Hamidou joins Kentucky's number one recruiting class and becomes the fifth member of the RENS 17U team to commit to a Division one school.  As a member of the 17U team, he led the RENS to the Elite Eight at the Peach Jam, won a gold medal with the Team USA U18 team at the 2016 FIBA Americas. 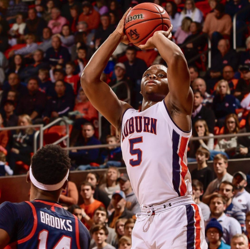 Arizona freshman guard, Rawle Alkins, scored 19 points and grabbed 7 rebounds in a rout of Stanford. Alkins finished 3-4 from behind the three point arc and a perfect 8-8 from the free throw line. The 16th ranked Wildcats have opened their Pac-12 play 4-0 and have won nine straight games since losing a tight game to 5th ranked and undefeated Gonzaga at the Staples Center. In those nine victories, Alkins has scored double figures in eight of them, raising his scoring average to just above twelve points per game over the first seventeen games of the season.

Auburn freshman guard, Mustapha Heron, continued his great play by scoring 20 points in a tough loss against Ole Miss. Heron leads the Tigers in scoring at just over 16 points per game and leads the team in rebounding at just above 6 per game. The Tigers have started conference play 0-3, but they will look to snap their losing streak against Missouri on Tuesday night. The Tigers will also face Kentucky on Saturday which is broadcasting on ESPN at 3 pm. With Heron's twenty point outing against Ole Miss, he became the only player to ever score double figures in his first 15 games at Auburn. 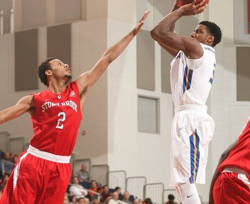 Hofstra sophomore guard Justin Wright Foreman came off the bench to score a career high 22 points in the Pride's 96-58 win over Stony Brook. Wright Foreman went 8-12 from the field including 2-4 from three point range and also grabbed eight rebounds. He has averaged 10.3 points per game coming off the bench through 12 games this season.

Jake Klores, who was a member of the RENS 17U team this year has committed to Columbia University. Klores played backup point guard for the RENS team that lost in the Elite Eight at the Peach Jam this past summer.  Jake is the fourth member of the 17U team to commit to a division one school. 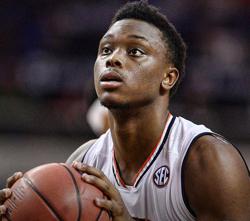 Auburn freshman star Mustapha Heron has continued his impressive play for the Tigers. The team traveled south to Mexico to play in the the Cancun Challenge, first facing off against Texas Tech in the semi-final game. Heron scored  15 points on an efficient 6-12 shooting from the field and 3-6 from the three point arc in a two point win for the Tigers. Heron followed his semi final performance up with another 15 points in a tough loss to Purdue. Mustapha ranks second on the team in scoring at 14.8 points per game, first in rebounding at 6.4 boards per game and first in three point percentage.

LIU Post freshman guard Jared Rivers has seen 21 minutes per game in the Pioneer's first six games. While the team has started 1-5, Rivers continues to give solid minutes, scoring seven points per game, including a 15 point night against Concorida.

Arizona freshman guard Rawle Alkins has averaged double figures (10.3 points per game) through the 16th ranked Wildcat's first six games. Indiana freshman Devonte Green has continued to give the 13th ranked Hoosiers valuable minutes off the bench, playing 14 minutes per game. Tyrique Jones, a freshman playing for Xavier has also has given tough, valuable minutes off the bench for the 7th ranked Musketeers as the team has started off 6-0.

Porzingis to Donate $500 for Each Blocked Shot to the RENS 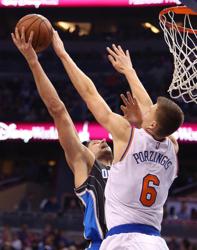 NEW YORK (AP) Kristaps Porzingis is turning blocks into bucks.The New York Knicks  forward will donate $500 for each of his blocked shots for the rest of the season to the RENS, a New York-area, not-for-profit youth basketball program.The RENS will use the donations from the ''KrisStops'' campaign for the Ben Jobe Educational and Scholarship Fund. It will help provide RENS participants with free tutoring, SAT prep and tuition money for students in third to eighth grades.The 7-foot-3 Porzingis, who is averaging 1.2 blocks, will announce the initiative Saturday at the Abyssinian Baptist Church in New York. The program will begin with Sunday's home game against Atlanta. Jobe, the Knicks' 83-year-old scout, won more than 530 games as a coach at seven black colleges and universities. 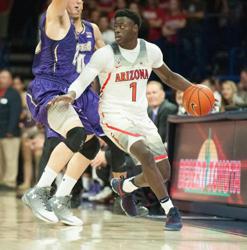 5-star freshman guard Rawle Alkins scored 15 points in a double digit victory against Cal State Bakersfield. Alkins went 4-6 from the three point line in the 78-66 win for the Wildcats.  Mustapha Heron scored 24 points on a perfect 8-8 shooting from the field while grabbing 10 rebounds for his first double-double of the season in a 85-64 win over Eastern Kentucky. 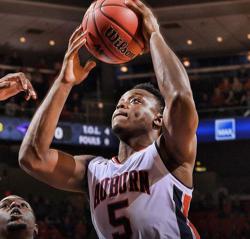 Friday marked the start of the College Basketball season for many former RENS players. In his first career game for UMASS, Tyrn Flowers had 11 points to go along with 7 boards in a 90-76 win for UMass against UMass- Lowell. Mustapha Heron also played his first collegiate game scoring 10 points for Auburn in their 83-66 win over North Florida. Preseason All-Ohio Valley Conference player Wayne Martin averaged 12 points and 11 rebounds over the first three games of the season for Tennessee State including a monster game against UC Davis where he poured in 19 points and grabbed 15 rebounds.

The RENS Featured on Fox 5 NY 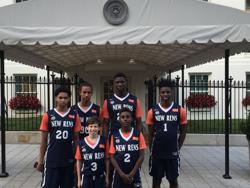 Fox 5 NY features The RENS and "The Patch" (Click the photo to see the video).

Hamidou Diallo Selected as a Finalist for Team USA U18 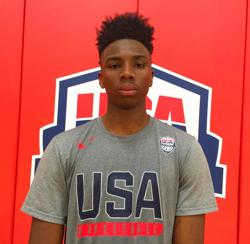 Hamidou Diallo has been selected as one of 18 finalist that will travel to Houston from July 11-15 in order to play for a spot on the final U18 roster that will head to Chile for FIBA Americas. Congratulations to Hamidou! 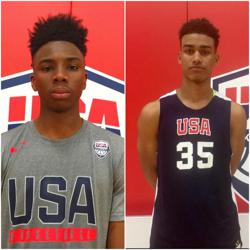 Jordan Tucker and Hamidou Diallo, along with 24 other players, traveled to Colorado Springs to compete in the U18 national team training camp. The 26 players selected will try to make the 12 man roster that heads to Chile from July 19-23 to compete for a gold medal in the 2016 FIBA Americas. Congratulations to both Jordan and Hamidou!

16's Kofi Cockburn was recognized as one of the top 100 underclassmen in the country as he traveled to St. Louis for the Nike Elite 100 Camp. In addition to a great performance at camp, Kofi added an offer from St. Johns University. 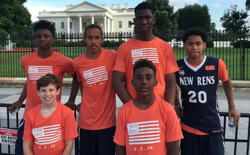